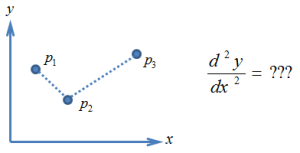 In practice, these points could represent measured data that we want to analyze like weather patterns or financial data. We will see that the second derivative is a linear combination of the three points. 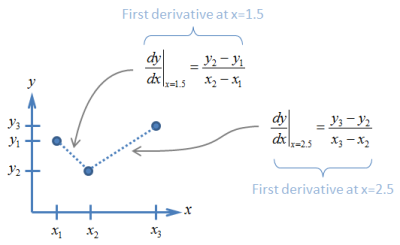 We have three points, so we can find two first derivatives using those points.

Label the x and y coordinates for the three points and use the finite difference formula to calculate the first derivatives.

These derivatives are not at the points; they occur between pairs of points.  For example, the derivative labeled x=1.5 is the derivative somewhere between x1 and x2. The number 1.5 suggests that it is precisely halfway between them, which is what we are assuming. 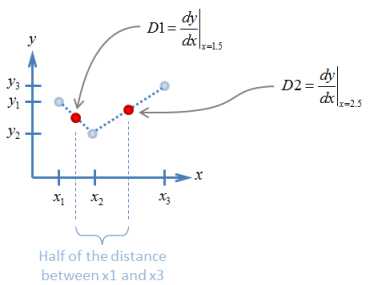 Now we plug in what we know about the first derivatives.  This is the answer, but let’s take it a step further.

One thing we can do is to write the second derivative as a linear combination of the y coordinates for the three points.  From this point forward we are doing algebra…

Now it is easy to see that the second derivative can be expressed as a linear combination of the y values.

Here is the Numerical Second Derivative Equation in Matrix Notation

Now for some examples

Let’s see how it works with evenly spaced points.  The second derivative of y = x2 is always 2, so this function is a good example.  It turns out that the coefficients [1, -2, 1] work for any three points separated by 1 unit in x.

This is similar to the previous example, but the points are no longer evenly spaced.  The third point is further away, and we see that the coefficients [2/3, -1, 1/3] place the smallest emphasis on the third point.  That point is further away and for that reason its value could be very different from the values of the other two points. (In this case 25 is much larger than 4 or 9.)  The small magnitude of the third coefficient helps to balance this out.

Now let’s try something different.  What if we use y = x3 instead of y = x2 to generate the points? 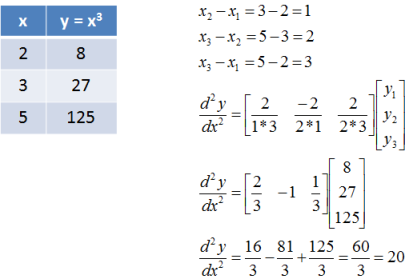 The answer is: This is all being done numerically, not analytically. The numerical process does not have a priori knowledge about the function represented in those three points, so it uses the only model it knows how to use with three data points – a quadratic model.

If we had four points, we could derive a formula that works for four points.  That formula would do the same thing, except that it would fit a cubic function instead of a quadratic function.  We could do this for any number of points, but then the equations get complicated. 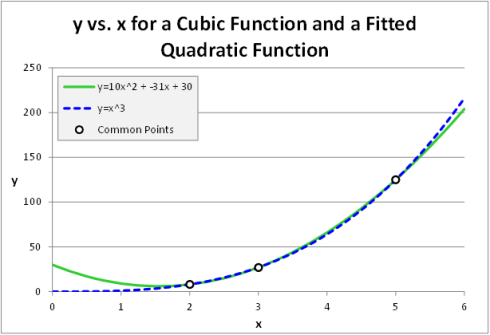 This entry was posted in Numerical Calculations and tagged Numerical Derivative, Second Derivative. Bookmark the permalink.